History and Epidemiology of Dengue

Origins of the word Dengue

Although dengue has been known by several names throughout the world, the term ‘dengue’ has been universally adapted. The origin of the term “dengue” may be traced to the Swahili word for the disease “ki-dingapepo”. The earliest description of an illness called “dengue” can be found in Spanish written records from 1800.

The term “denga”, or “dyenga,” had also been used to designate the disease during outbreaks in East Africa and West Indies during the early 19th century. It was only after the 1828 outbreak in Cuba that the Spanish word “dengue” came into general use, which continues to this day.

The earliest historical evidence of dengue like illness were found in China in 992 A.D. They described the disease as ‘water poison’ and noted it to be associated with flying insects. The first account of a disease resembling symptoms of dengue was reported in Philadelphia, in 1780.

In the year 1906, Thomas Lane Bancroft suggested that the mosquito vector Aedesaegypti transmitted dengue, and the following year in 1907, Ashburn and Craig proved that dengue was caused by a virus.Japanese scientists were first to discover the DENV-1 in 1943. Subsequently, in 1944, DENV-2 was discovered by Albert Sabin.

In November 15, 1902,Skae reported the first known published account of an outbreak of dengue in Malaya. He described a dengue outbreak in the northern state of Penang from December 1901 to March 1903. Severe dengue (Dengue Haemorrhagic Fever) was first observed in Malaya in the city of Georgetown, Penang in November 1962.

From the 1960s dengue cases began to spread into the urban areas of Penang and Kuala Lumpur. By the early 1970s, DHF had spread to the whole Malaysia and has since caused a significant health burden to the population in Malaysia.

Dengue was classified by The World Health Organisation (WHO) in 2012, as the most important mosquito-borne viral disease in the world. Dengue is also the world’s most rapidly spreading and geographically widespread mosquitio-borne disease. WHO has reported that there has been a marked rise of annual dengue cases since the 1950’s. Dengue epidemics are observed to be larger, more frequent and associated with more severe disease than they were in the past. 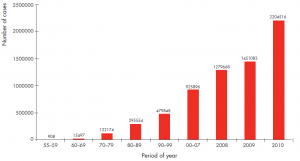 Up to 3.6 billion people are estimated to now live in tropical and subtropical areas where the dengue viruses have the potential to be transmitted. Globally it is estimated that approximately 50 million to 200 million dengue infections, 500,000 cases of severe dengue, and over 20,000 dengue related deaths occur annually.

The geographical distribution of dengue is linked to the areas where the mosquito species Aedes aegypti and Aedes albopictus can be found. Uncontrolled urbanisation, expanding urban population, poverty, ineffective public health infrastructure, indiscriminate disposal of waste, faster modes of transportation, globalisation of trade and increased international travel have all been implicated as factors leading to the spread of dengue around the world.

In Malaysia, dengue is predominantly an urban disease due to the abundance of the principle vector Aedes aegypti which is at a close proximity to high densities of susceptible hosts. The states of Selangor, Wilayah Persekutuan Kuala Lumpur and Johor are the areas that have been largely affected by the disease and are reporting high numbers of cases.

Factors like population growth in urban areas, the indiscriminate disposal of waste coupled with the lack of efficient solid waste management and the increased and efficient movement of dengue viruses in infected humans through modern transportation have all contributed to the marked increase in the occurrence of dengue. 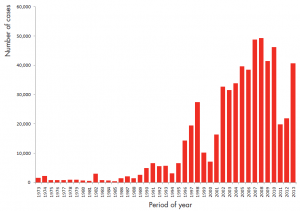 Since the notification of dengue was made mandatory in Malaysia since early 1970’s, dengue epidemic activity in Malaysia has been increasing in frequency and intensity over the past 40 years.

Dengue in Malaysia was predominantly confined to the densely populated and urbanised areas of Peninsular Malaysiawhich cater for 20 million of the country’s 29 million inhabitants.This contributed to 90% of all notifications received nationwide.. 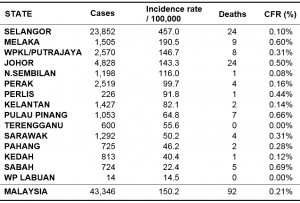 The total number of deaths reported due to dengue in 2013 was 92 with a Case Fatality Rate of 0.21%. The states with the highest numbers of deaths were Selangor and Johor with 24 deaths each.

The best preventive measure for areas infested with Aedes mosquito is to eliminate the mosquitoes’ egg laying sites – called source reduction. Lowering the number of eggs, larvae and pupae will reduce the number of emerging adult mosquitoes and the transmission of the disease.

Items that collect rainwater or are used to store water should be covered or properly discarded. The remaining essential containers should be emptied and cleaned and scrubbed (to remove eggs) at least once a week. This will avoid the adult mosquitoes to emerge from the egg/ larva/ pupa stage.

In fact, the community participation is the key to dengue prevention. As every household aims to reduce vector density, the transmission rate will decrease or even stop. In addition, protecting oneself from mosquito bites is most effective by reducing exposed skin to mosquitoes to bite on. Long-sleeved clothing and mosquito repellents are the most viable options. Window and door screens reduces the risk of mosquitoes coming into contact with the household members. Mosquito nets will also provide additional protection against mosquito bites. Insecticide aerosols, or other insecticide vaporizers maybe also reduce biting activity. 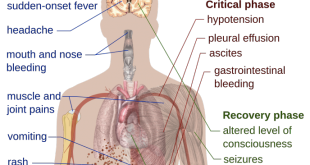